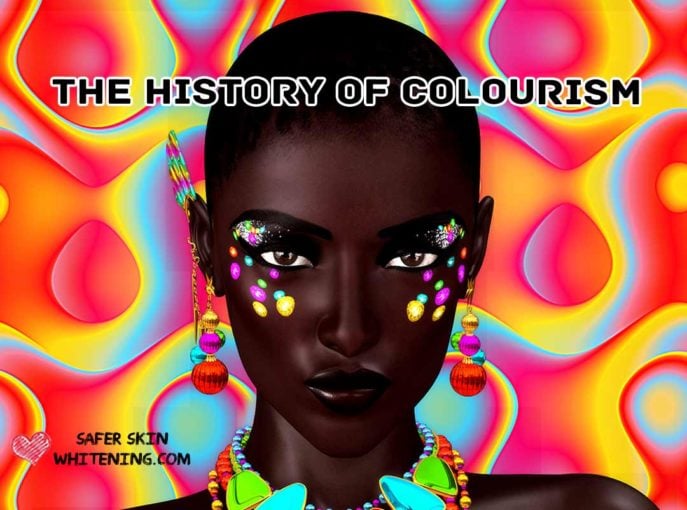 The History of Colourism

Colourism is discrimination based on skin colour where fair coloured individuals are favoured above their dark skinned counterparts. This is more than just an admiration for light skinned people; it is a deeply embedded repulsion for dark skin and what it represents even by dark skinned people themselves.

Colourism in our societies is real, live and working each day to threaten the very existence of black skin as we know it. When the colour of your skin dictates how successful you become, the people you hang out with, and how other people look at you among other aspects of your life, then it is no longer business as usual.

The Origin of Colourism

Colourism can trace its origin back to slavery and colonization. While the white people had their own ideologies and theories that placed the other races below them, with Africans at the bottom, they needed to have interacted with people of colour to indoctrinate them into self hate and hate for others like them. Colonization and slavery provided the perfect avenues.

Asians are known to have occupied 25% of Egypt, which formed North Eastern Ethiopia back in the 3rd Millennium BC. This was way before the slave trade. The interaction led to the rise of a mixed, lighter skinned class born of the Asians and the black women. Children born of these unions took up the identities of their fathers and were therefore pushed higher into the social order.

They took up leadership alongside their Asian fathers and as expected, the first people to be called Egyptians were under the leadership of this mixed offspring. They had no regard whatsoever for their black mothers’ race which was condemned to remain inferior.

The colonization of Africa between the 15th and the 20th century was also a great player in colourism. Europeans represented power, plus they brought with them the promise of a better life, opportunity, sophistication and greatness. In the people’s eyes, the only thing that stood between them and these things was lighter skin.

Between the 15th and 19th century, the slave trade saw numerous Africans enslaved in the West. As in the case with Asians, children were born of the white masters and the female black slaves. The mulattos, as they were commonly called were fair skinned which earned them privileged treatment. They were housed in their masters’ homes to do domestic work which was easier.

Some slave masters even helped their mulatto offspring to get freedom and others sent theirs abroad to study. Upon their return, they took up jobs as lawyers, teachers and doctors among others. By then it was clear to the black slave community that lighter skin meant beauty and privilege; the key to a better life.

Colourism in our societies is real, live and working each day to threaten the very existence of black skin as we know it.

The feeling was not lost on the lighter skinned slaves either; only for them it was rewarding to know that they were better than their black counterparts in every respect. When slavery ended during the 19th century, the gap between the light and the dark skinned Africans could not be bridged. Colourism was too deep rooted.

In US, the mulattoes were not willing to give up their position in the society. Black people whose ‘blue veins’ could not show through the skin were not admitted to schools, churches, institution of higher learning and other social places because they were not light enough. Other tests like the paper bag test and comb tests were also used deny them admission.

This culture outlived slavery, decades later, colourism was still rampant. It still affected education, employment and social status in America by 1960. Offspring of the black people knew nothing of their ancestors’ history apart from the fact that they were slaves. They grew up hating what black skin represented and knowing that being black meant they were not good enough.

Latin American countries like Brazil, Cuba, Colombia, Panama and Venezuela have quite a significant number of a dark skinned population, with Brazil topping the list. This is probably because it had the largest number of slaves. Colourism was rampant and was even given credibility by government policies that clearly favoured light skinned people over the dark skinned.

An immigration decree No. 58 that was put to effect on 28th June 1890 by Manoel Deodoro da Fone denied immigrants with African, Asian and indigenous descents from migrating into Brazil. Dark skinned Brazilians were generally denied land titles and opportunities for formal employment.

On the other hand, immigrants from Europe were offered free entry into Brazil, land grants, state funded housing, cash grants, food and hospital care in what was referred as the ‘whitening project’.

For Asians, lighter skin was associated with the affluent since they could afford to stay sheltered from harsh weather. The poor on the other hand had to work in the scorching sun as manual labourers. This darkened their skin. The high status accorded to the white colonial masters by Asian colonies like Indians, Vietnamese and Filipinos also made the people value white skin colour.

In the UK, colourism can be traced back to scientific theories that uphold the superiority of the white race and treads down on the black race. Carl von Linnaeus and German anatomist Blumenbach gave different classifications of race. However, both concluded that African Race was inferior to all others.

During the Victorian Era, explorers wrote about their African tours which painted Africa as an evil place and Africans as ‘savages and barbarians’ who needed civilization, such portrayal was bound to spark prejudice against black skin and value for lighter skin. Dark skinned people could therefore not be treated with any dignity.

Colourism is a global issue. The above are just a few representations of different regions of the world.

It is easy to read about colourism like it is history…so sad, right? Except, it is not! Such a strong historical backing only proves that you don’t have to look far to come face to face with the fact that lighter skin is considered better, more beautiful and more acceptable.

Mass media has played a big role in promoting colourism. The fact that it can influence many aspects of our lives makes it a powerful tool for promoting colour discrimination. According to The New York times, 18th Jan 2010, skin tone and other aspects of race are great determinants of employment opportunities, political outcomes, perception of intelligence, and even how justice is served.

The issue gives an account of 2 murder trials in Philadelphia involving two defendants, one light skinned and the other dark skinned. Despite a lot of evidence against the light skinned and little against his dark counterpart, the former gets life sentence while the latter gets death raw. There was no proof that skin colour was involved but you can’t help wondering…

When it comes down to physical appearance and skin colour for that matter, women are judged more harshly than their male counterparts. The colour of their skin gets to determine the kind of jobs they get, their social status and even the kind of husbands they get married to.

Lighter skin can therefore translate to association with the affluent, better employment rate by up to 20% and better paying jobs (65% more) than dark skinned women. It can also create an opportunity to get a desirable marriage partner. Beyonce’s father, Matthew Knowles confesses to having dated white or only very light skinned girls despite being dark skinned himself.

Hollywood producers and agents have been accused of propping up light skinned and straight haired black women and outrightly ignoring the true representation of black women. They do this while purporting to give all-inclusive representation.

A good example is using the light skinned Zoe Saldana to play Nina Simone, a dark skinned singer and activist in explicitly. Zoe had to go through a lot of makeup to play a role that could have been easily played by a dark skinned woman.

In UK the same sentiments are echoed; there is a scarcity of dark skinned actors. A move that many embraced as a step in the right direction involved featuring Thandie Newton, a British born biracial woman in a film adaptation of the award winning novel Half of a Yellow Sun by Ngozi Andichie.

However, the move drew negative reactions and a petition citing that she was in no way fit to represent an Igbo woman. The petitioner cited that Thandie was just another way of portraying black as ugly and undesirable and light as the way to go.

India’s Bollywood has also been accused of discriminately giving forefront acting roles to the fairer skinned. India’s skin lightening market was worth 432M in 2010 and reported a growth of 18% per year. The lightening products are usually endorsed by celebrities, whose images look altered to appear whiter, keeping colourism on the go.

Tina Daheley an Asian BBC newsreader confirms the existence of colourism by saying that “Light skin privilege is REAL’’. She gives this as a comment on a story about light skin celebs having it easier.

The world of music and advertisement has not been left behind either. The people of colour who have made it in the music industry have ‘one thing in common’; light skin. This is according to Matthew Knowles. He further adds that he had been conditioned to believe that white was better and that his desire to date white women was a way of getting ‘back or getting even’.

Some advertisement photos of dark coloured models have raised suspicion of whitening. Beyonce’s L’Oreal advert photo raised eyebrows because her skin was several shades lighter and her hair long and blonde, the very representation of ‘beauty’.

Back in Africa, many countries are struggling with issues of colourism. A good example is South Africa. Changing the tone of your skin to a lighter tone significantly adds value to your life. People will generally have a better perception about you, acknowledge and respect you. The phrase ‘Yellow-Bone Factory’ is a familiar one. It involves bleaching your skin to achieve the lightest tone.

Where does this leave Us?

The clamour for skin lightening is not going anywhere anytime soon. We are therefore left with a large population of dark skinned women who are prepared to do whatever it takes to get lighter skin. This is in an effort to become beautiful, improve social standing and increase employability among other benefits.

The insatiable needs have led to the saturation of the market with substandard and dangerous skin lightening products. Unfortunately, some of these ventures have produced devastating results. On the other hand, men too are joining the bandwagon of skin lightening while quite a good number is likely to choose lighter skinned women as spouses.

The role of mass media cannot be underestimated, it will continue to fill our minds with perceptions of dark is ugly and light is beautiful unless we do less of lightening products bans and do more to educate the populace on the dangers of some of this products and above all else, the value of self love.

Sonia Knight is the founder of be:skinformed.

Apart from having her own experience with hyperpigmentation, Sonia has gained vast knowledge in the dermatology field. For more info on this, check out our about us page.