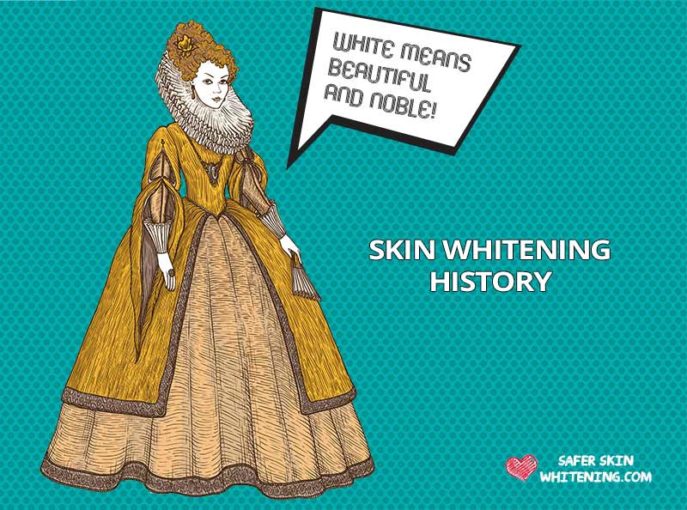 Around the globe, from India to China to America, billboards and advertisements abound with notions of lighter skin as beautiful. More beautiful, in fact, than darker skin. One is absolutely right to wonder where these ideas originated from, how they became so popular, and whether or not they are actually true. From a research and fact-based standpoint, the following write-up will address these questions. It will look at the skin whitening history as well as the forces that have made it so popular and engrained within contemporary global society.

To great surprise, the history of skin whitening practice actually began within the white community itself. Queen Elizabeth I’s early and meticulous efforts to appear ghostly white and nearly transparent during her 16th century rule soon became known as the “Elizabethan ideal of beauty”. The whiter one’s skin was, they more beautiful and noble they were perceived to be. European colonization practices from Asia to Africa to India during the latter half of the second millennium rapidly began to spread these beliefs to all corners of the globe. Among such ideologies were associations of darkness and blackness with primitiveness, unrestrained sexuality, and pollution, while whiteness was associated with purity, power, and beauty.

In order to escape the various forms of discrimination and oppression that came by way of colonization, local populations desperately began to search for ways to escape such negative associations. Through various mediums, mostly dependent on geography, colonized peoples all around the world began to search for ways to lighten their skin and attain the white or light-skinned privilege that they observed around them. When Europeans eventually began to leave the colonies and grant them independence.  However, Western notions of white-as-beautiful did not leave with them.

It had already been ingrained in the minds of local populations around the world that white was better. Contemporary twentieth and twenty-first century marketing strategies continue to rely heavily on these centuries-old ideas in order to make people believe that having lighter skin will make them more beautiful, more powerful, and ultimately somehow “better”.

Controversial TV ad what was later pulled by the company

Through ruthless contemporary marketing strategies and the spread of global capitalism, skin lightening history has become interwoven into people, products, and culture. So much so, in fact, that it is taken as an unquestioned and necessary aspect of life in many countries. Whereas colonization used to take the primary form of Western countries moving into the territory and controlling it by force, modern imperialistic practices involve the use of billboards, television commercials, magazines, and movies.

The promotion of white superiority and lighter skin as better has continued to grow from the time of Queen Elizabeth I through today. It has simply taken a new and disguised form. People continue to lighten their skin in order to increase chances of employment, decrease chances of unwanted attention by law enforcement, and avoid being told that they are too dark to be beautiful. These are all forms of contemporary oppression and discrimination that have evolved from those of centuries past. People today lighten their skin in order to increase their life chances, just as people did hundreds of years ago.

From the Renaissance period to the prehistoric times, the white skin is seen as the sign of virtue and modesty among women while red lips represented the beauty and passion. The ideal combinations for women were red cheeks and clips with a white face. The practice of Skin bleaching has increasingly become popular to chemically whiten the skin which has been quite common around the globe in the past 30-40 years.

While the global history of skin bleaching can track back to the age of Elizabethan with paint and powder, in the current manifestation, the bleaching is being practiced proportionately among the different communities of “skin color” and exceedingly among the Asian and African descent.

Historically the paler skin was linked to the bourgeoisie and it was made to represent success and wealth. Traditionally the darker skin was related to the menial poverty and labor, as the skin was affected by the darkening under the severe outdoor conditions during the work.

Countries and regions where skin lightening products are banned

The History of Colourism