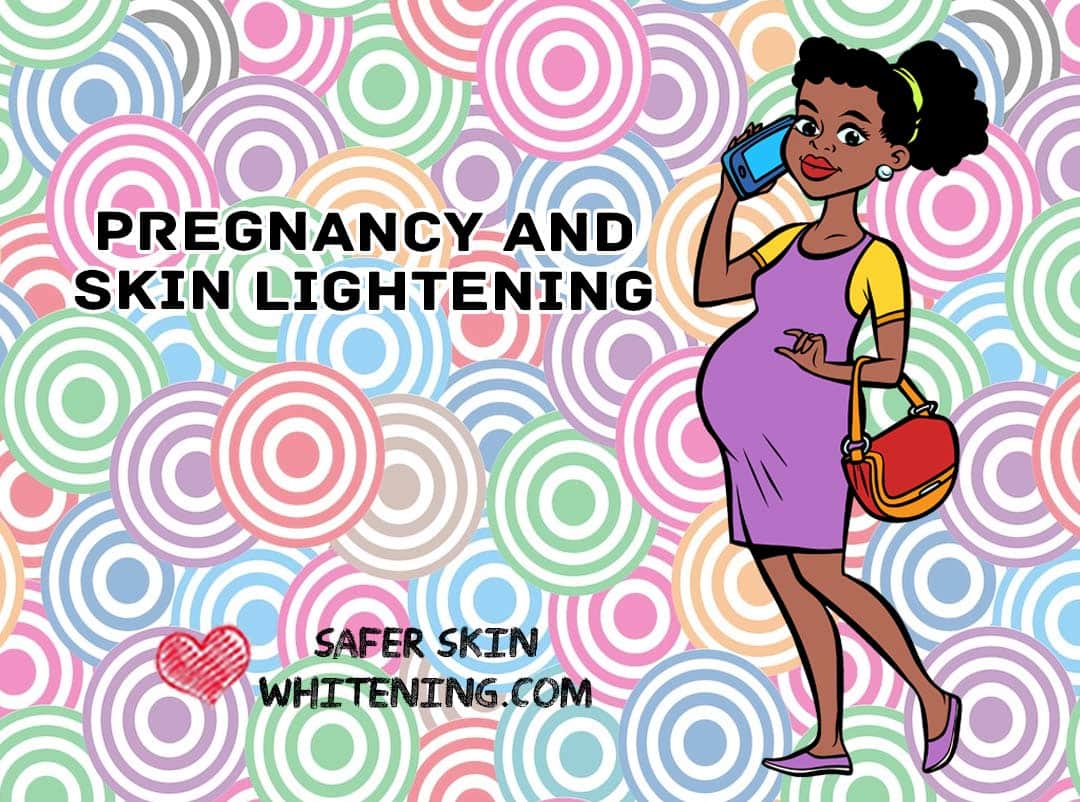 Pregnancy and Skin Lightening – Everything You Need to Know

Skincare market is booming with skin lightening products that promise you whiter, smoother and flawless skin in no time. However, when it comes down to the safety of the products, it is your sole responsibility to ensure you do not use products that can harm your health. It is an even bigger responsibility when you are pregnant and need to protect your unborn baby from potential harm.

Unfortunately, there is not enough research or evidence on commonly used ingredients to guarantee the complete safety of your baby.

To give you an even clearer picture, we have highlighted some of the most common ingredients in skin lighteners and any existing data concerning their safety during pregnancy.

Are you concerned about pregnancy and skin lightening? Here’s everything you need to know

Please remember: Most of the studies we cite here were only done during pregnancy and so there is no way to tell what happened to the children after they were born or by their 5th birthday. This somehow renders these studies rather inconclusive on long term effects of prenatal exposure.

Hydroquinone is made from Benzene, a known carcinogen. It is a common ingredient in skin lightening products which works by inhibiting melanin production. Its melanin inhibiting properties have made it an effective treatment against cases of skin hyperpigmentation like melasma, chloasma, sunspots, acne scars etc. It can cause mild side effects like irritation and dryness or more severe ones like contact dermatitis, extreme dryness and bleeding. When used on topically on mice in a certain research, it increased incidence of skin tumour. 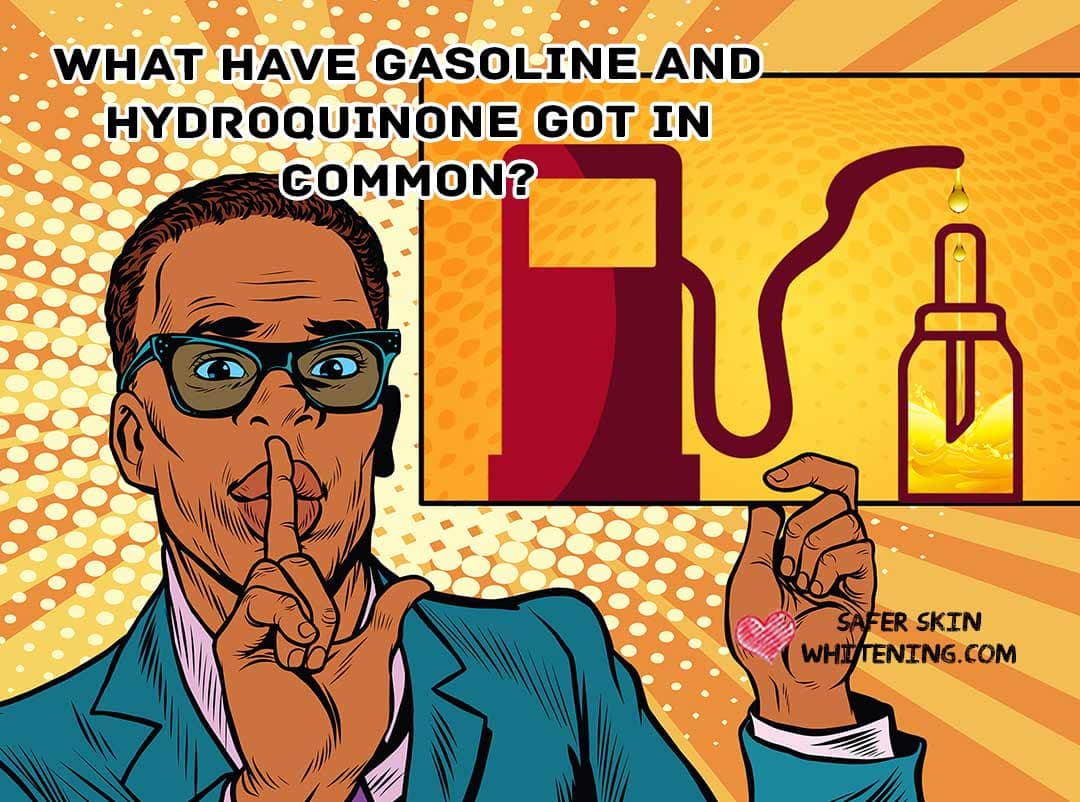 There is a lot of controversy surrounding the use of hydroquinone in both beauty and skin whitening products. After reports linking its use to exogenous ochronosis and carcinogenicity, FDA reduced the permissible concentration of Hydroquinone in OTC creams to 2%. Concentrations of 4% and above are to be acquired with a prescription.

That was not all; its use was linked to other health risks which led to it being banned in several regions and countries. Canada prohibited use of hydroquinone in cosmetic products, while UK, Japan and European Union banned its use for skin lightening.

Another concern about the use of hydroquinone is its systemic absorption into the bloodstream. Apparently, 35-45% gets absorbed into your system following topical application. A research that involved 99 pregnant women in Senegal Africa was carried out to assess if hydroquinone caused any harm during pregnancy.

No changes were noticed between babies of the women who used hydroquinone and those who did not. Since only a small number of women was used, the investigations were not considered sufficient enough to rule either in support of or against it use. Hence, there was need for more investigations. Until further studies rule out any risks, you would be safer if you avoided hydroquinone during pregnancy.

Hydrogen peroxide is a weak acid that is slightly viscous than water. It’s used as a ripening agent in food industry as well as bleach for hair. It’s also used in most at-home skin bleaching regimens.

When used for skin bleaching, organic materials are added to stabilize it. This is because it’s a strong oxidant which is relatively unstable. A typical home made lightener consists of; 2 spoons of floor, 2 spoons of peroxide, 1 spoon of milk and some water, mixed together to make a mask.

Hydrogen peroxide is relatively safe compared to other skin lightening ingredients. Human testing is inadequate but tests on animals have shown that topical application of 3-8% HP over a 24hr period is non -irritating even on abraded skin. Higher concentrations can however lead to peeling of the skin when applied over a long period.

Topical hydrogen peroxide is classified under pregnancy category C by the FDA. Drugs under this category are supposed to be used with caution and only if their benefits outweigh the risks.

That said; no exposure is expected on the fetus following topical administration by the mother. Reason being it’s not absorbed systemically when applied on the skin.

Glutathione is another skin lightening ingredient that is catching on in the cosmetic industry. Its body’s most powerful antioxidant and is found in the liver as well as in fruits and vegetables. Apart from skin depigmentation, it’s used in treating glaucoma, asthma and heart diseases.

Glutathione can used both as a topical cream and as an oral pill to inhibit and reduce skin melanin production. It can also be injected to give the same results.

Click on the image below to read more about injecting glutathione: 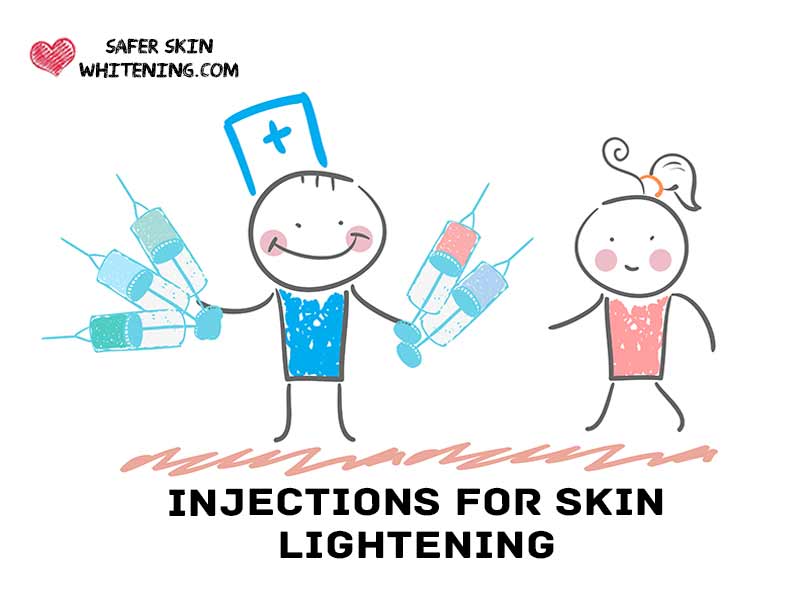 A study has shown that application of 2% glutathione cream twice a day for 10 weeks is effective in skin lightening and has no adverse effect on the skin.

A separate study on oral administration of 500 mg glutathione capsules per day for 4 weeks resulted in increased reduction of melanin in some test subjects. However, in both studies it was concluded that more has to be done in terms of research to ascertain safety in long term use.

Although not much research has been done to test the effects of glutathione on human pregnancy, tests on animals have given worrisome results.

A study carried out by Kitasato University and University of Tokyo showed that injection of glutathione on gestating mice elevated maternal death. Increase in abortion rate was also recorded as well as decrease in body weight. Until future human testing proves otherwise, it’s best that you do not use glutathione during pregnancy.

While we are it, let’s not forget what FDA has to say about use of injectable skin lighteners; “These products are potentially unsafe and ineffective, and might contain unknown harmful ingredients or contaminants. FDA has not approved any injectable drugs for skin whitening or lightening”

Azelaic acid is another skin lightening ingredient that deserves a mention. It features in many skin lightening foams, gels, and creams as a natural ingredient. The acid occurs naturally in grains like wheat and barley. It whitens the skin by inhibiting tyrosinase, the enzyme responsible for melanin production on the skin.

AzA started out as an acne treatment. It kills acne-causing bacteria in skin pores and at the same time reduces inflammation and inhibits keratin production. It’s quite effective in getting rid of acne but it comes with one major side effect; skin bleaching. Once doctors realized this, it was only a matter of time before it started being marketed as a skin lightener.

Azelaic acid fares well in lightening skin compared to other ingredients like hydroquinone. A study found that 20% AzA yields similar results to 4% HQ without the common side effects associated with prolonged HQ use; that is allergic inflammation and speckled pigmentation.

Despite the effectiveness of the treatment, its use is not recommended during pregnancy. This is because limited data exists on the risk factors it would pose to a developing fetus.

That said, the acid can be used to treat severe cases of acne that may accompany pregnancy. This is done in combination with antibiotics to increase bacterial resistance. However, a doctor is required to weigh the benefits against risks before prescribing AzA to an expectant mother.

Mercury is a common ingredient in both skin lightening soaps and creams. Some eye makeup cleansing products and mascara also contain the highly toxic compound. The ingredient is available both in its organic and inorganic form. Any product that contains mercury should be considered harmful. That includes mercury tablets used to preserve food and to keep pests away from grain in some countries.

Be on the lookout for products whose ingredients lists include mercury chloride, ammoniated mercury chloride, mercury iodide and phenyl mercuric salts. Other mercury-based compounds that should not escape your eye include; quicksilver, cinnabaris, hydrargyri oxydum rubrum,calomel and mercurio.

Long-term exposure or use of mercury-based skin lighteners results in adverse side effects such as;

Pregnant women should NEVER use products that contain mercury. Studies have shown that prenatal mercury exposure can lead to permanent neurological damage to the fetus. It can also cause infertility and birth defects.

“We know that fetuses are far more sensitive to mercury than adults, and you can get very severe injury to the fetus without the mother showing any symptoms at all”.

Topical steroids also known as Corticosteroids are anti-inflammatory agents used in treating some skin conditions as well as depigmenting dark skin. Clobetasol Propionate, Betamethasone Dipropionate and Fluocinolone Acetonide are some of the corticosteroids found in steroid-based skin whitening creams.

Although corticosteroid creams are fast acting, their skin lightening effect is short lived; once use is discontinued, the skin reverts to its original tone. If prescribed by a doctor and used under strict guidelines, corticosteroids are effective in treating skin conditions like eczema.

Prolonged use of high doses of steroid-based skin care products can lead to;

Lack of conclusive studies on the teratogenicity of topical corticosteroids has led FDA to categorize them under Pregnancy Category C. This means that use can only be informed by a qualified doctor and only if the benefits outweigh the potential risk to the foetus.

Animal studies have shown teratogenic defects as a result of corticosteroids use. Defects were observed after test subjects were exposed to high doses or when use was prolonged. Foetal deformities ranged from malformation of sex organs to instances of cleft lips. In another study, pregnant women used highly potent steroids to lighten their skin.

There are numerous natural skin lightening ingredients. Apart from some of the ones featured above, other common ones are Mulberry extracts, Alpha Arbutin, Kojic Acid, Vitamin C, Beta Arbutin, Liquorice root, Papaya and Vitamin B3 among others. These ingredients are generally considered safer whether you are pregnant or not.

Check out this article to find a full list of natural ingredients.

This is because they are able to gradually block melanin production hence lightening your skin without producing toxic effects. However, there is not enough evidence to conclude none of these will affect you or your baby during pregnancy.

If you decide to go ahead with skin lightening while you are pregnant, here are a few tips to guide you.

When you are pregnant, using skin lighteners comes down to personal responsibility and responsibility towards your unborn child. You should not use any products that can compromise your baby’s safety.

While some skin lightening ingredients out-rightly come out as dangerous, the safety of the others cannot be 100% guaranteed. This is due to lack of enough research into particular ingredients.

There are numerous ingredients but we have focused on the most commonly used. If it is possible, it is better to hold off skin lightening until the baby is born. However, if you deem it necessary, it is advisable to do it with caution or with advice from your doctor.

Sonia Knight is the founder of be:skinformed.

Apart from having her own experience with hyperpigmentation, Sonia has gained vast knowledge in the dermatology field. For more info on this, check out our about us page.

Everything You Need To Know About Eczema and Skin Discolouration

Linea Nigra or Pregnancy Line and Everything You Need to Know

Lactic Acid: Benefits and How to Use it For Skin Lightening